There is a lot to be excited about when it comes to devices for the Internet of Things (IoT). From a consumer standpoint (voice activated devices, smart watches and home security cameras) have been hot for some time now, but IoT has also become a key asset for industrial and enterprise entities for a number of industry verticals. 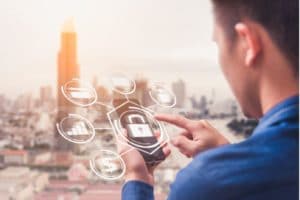 While the rise of IoT has led to more Internet-connected devices, this connectivity does not come without risk—especially in terms of cybersecurity. However, those security risks also come with potential rewards. It’s just a matter of operators figuring out how to best monetize the IoT.
Oracle executives John Lenns and Travis Russell recently talked about the opportunities IoT presents and the need for cybersecurity with these devices. According to Lenns, more “smart” ecosystems are being developed for homes, cities, offices and vehicles. The Oracle Communications Vice President of Product Marketing stated this development would prove to be both a challenge and opportunity for communications service providers.
“The opportunity is that it’s going to open up a whole new set of revenue potential for these CSP’s to service businesses and enterprises,” Lenns said in an interview. “The challenge that’s going to be put forth simultaneous to the opportunity is how to do it profitably.”
Lenns also discussed how IoT traffic differs from the everyday mobile phone use people are accustomed  to in regards to Oracle’s signaling and core focus. According to Lenns, the big difference is a number of IoT use cases involve devices that don’t have continuous sessions—such devices are surveyed for their input only, like a meter or an LED in a lamppost. The “quick-on, quick-off” type of ecosystems will produce less revenue per device, Lenns said. That means use cases will have to be deployed in a more cost effective manner.
Russell, who is Oracle Communications’ Director of Cybersecurity, stated the uptick of IoT devices brings more risks, but security is at the forefront from a standards development perspective. Russell pointed out a trend he noticed in that with 3G and 4G deployment, there were numerous liaison efforts with other global standards bodies. Now, Russell says Oracle has learned from its past mistakes and working to fix things ahead of time.

“I think we’re going to see, from a security perspective, much stronger security,” Russell said in an interview. Russell also noted that previously, cybersecurity concerns were seen as “academic and theoretical.” Now, he says people have learned that’s not the case—these concerns are warranted and cyber attacks are actually happening. “I think we’re going to see a lot more focus on it going forward,” he said.