The Connectivity Expo, also known as Connect (X) provided conference attendees ample opportunities to learn and discover anything they wanted to about the wireless industry this week.
The conference, held at the Charlotte Convention Center on May 21-24 in Charlotte, NC, brought together connectivity solution buyers and sellers and showcased the innovative technology, underlying infrastructure and partner ecosystem that drives the future of communications, according to conference website. 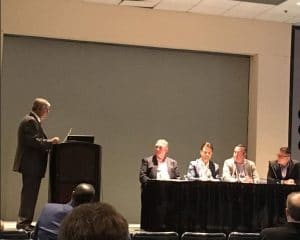 Connect (X) was designed to serve all branches of the wireless industry, which continues to expand and evolve, from macro structures that reside above ground to the miles of fiber networks that make their presence felt underground to the tech that drives the continuous network densification in cities and the technology that lives in our vehicles.

More than 100 companies displayed in the conference center’s Exhibit Hall, but a lot of the action took place two stories above, where there were hours of keynote speeches and breakout sessions geared towards the wireless industry over the course of two days. Topics covered included intelligent edge networks, smart and connected communities, private LTE networks and the rules that surround the impending Citizens Broadband Radio Service (CBRS) and macro cells.
CBRS, and in turn private LTE networks, was a popular topic in a number of the panel discussions and keynote speeches. For example, spectrum management software company Federated Wireless chief executive officer Iyad Tarazi and Vivint Internet chief technology officer Mike Hart discussed the matter and CBRS’ inevitable arrival during their “The Future of Connectivity: Innovation Through Private LTE Network Services” keynote speech.
When Tarazi asked Hart what his advice for people who think disruption in the way of CBRS is coming or how they should prepare for that disruption, Hart essentially said to be prepared because CBRS will be here sooner than later.
“I personally think there is disruption coming,” Hart said. “We are a proponent of that and we are trying to use that as an opportunity ourselves to disrupt. It’s one of those cases where I think CBRS is inevitable. There’s no ‘if’; it’s really a matter of ‘when’ and the when is down to months now as opposed to years. It’s going to come, it’s going to happen.”
Meanwhile, Fifth Gen Media chief executive officer and publisher Rich Berliner moderated a breakout session panel called, “Connectivity in the Enterprise: What is the Right Strategy and the Right Tools to Meet Enterprise Demand for Coverage?”
Berliner was joined by a cross-section of industry experts to answer some of the tougher questions surrounding the in-building cellular space as capital investments have moved away from operators and towards venue owners. Some of those questions included how to meet enterprise decision makers’ needs with the best tool for their unique case and when’s the right time so suggest Wi-Fi instead of LTE or DAS versus Small Cell.
The experts who joined Berliner to discuss these issues and more included SureCall vice president Frankie Smith, Advanced Network Services, president and general manager Paul Fettuccia, Vornado vice president Nick Stello and Comba Telecom vice president of strategic development Patrick Lau.
“What I like to bring to these shows is the customer approach to things and that is why we’ve tried to have commercial real estate people on our panels to talk about what it looks like from where they sit,” Berliner said.
During the lively, one-hour-plus discussion, one of the more common themes how important it is for venue owners to make sure they have quality in-building coverage because tenants are continuously demanding it—some to the point that coverage is part of many lease agreements.
The demand leaves building owners almost no choice but to ensure their building has good cellular coverage. While it’s an expense, it’s become the price of doing business if they want to fill vacancies. The panel discussed how it is in a lot of owners’ best interest to “light up” their buildings with cellular coverage as cost effectively as possible, either with Distributed Antenna System (DAS) or signal boosters.
Since no commercial real estate and wireless conversation would be complete without mentioning CBRS, that was brought up as an option, too. LTE coverage is more dependable than Wi-Fi, but also more costly. CBRS would allow venue owners to provide tenants and building LTE-quality coverage without the LTE cost. The Federal Communications Commission (FCC) has yet to approve this though, so it would behoove owners not to count on it quite yet.
Towards the end of the discussion, the panel raised a point that’s been talked about in the industry for quite some time—how wireless is the Fourth Utility and should be treated as such. Berliner commented that during construction, water and electricity aren’t added to a building after the fact, it’s done while the construction is happening, and it’s time the same be done with wireless.
“I think (the panel) went well,” Berliner said. “We got a lot of questions—we had three commercial real estate people with us, and they gave some really interesting opinions on things. There were also a lot of really good questions from the audience.”