President Trump signed an executive order this week designed to encourage artificial intelligence (AI) and regulation, reports The New York Times. Many experts deem AI as the technology that will define the future of almost everything including consumer products, healthcare and warfare. 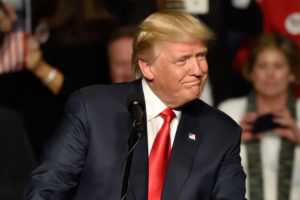 The executive order comes as welcome news to AI experts in the technology industry, academia and government as they’ve long hoped the Trump administration would make AI development a top priority. There had also been concerns that the U.S. was not keeping up with China and other nations in the AI race—so much so that then defense secretary Jim Mattis sent a memo to the White House requesting the President to develop a national AI strategy.
Now that the executive order has been signed, there’s concern the “American AI Initiative” is not as bold as people were hoping for, according to The New York Times. The order is geared to better educate workers in the industry and improve the cloud computing services and data necessary to build AI systems. The executive order also called for cooperation with foreign powers. However, there were no funds dedicated for AI research and development in the executive order, and there weren’t many details on how the new policies would be put into effect.
Currently, American companies like Google and Amazon are global AI leaders, but industry experts have raised concerns China could pass the U.S. in developing the types of technology that could power surveillance systems, self-driving cars, numerous Internet services and more. China unveiled its plan to become the leader in AI in July 2017 and has its sights on creating an industry worth $150 billion to its economy by 2030. Additionally, two Chinese cities pledged to invest $7 billion towards AI efforts, while South Korean, British, French and Canadian governments have started making sizable investments in AI.
Meanwhile in the U.S., the Defense Department has sped up its embracing AI, moving $75 million of its annual budget to a new office dedicated to developing AI tech. While other government agencies are also working on AI-centric projects, there’s concern top talent is moving away from these agencies to work at Google and Amazon. These concerns were elevated last year after Google left a project to build AI for the Pentagon because employees felt the tech they were working on could be used for lethal purposes, according to The New York Times. Now, companies like Google are expanding their operations in China, France and Canada as the talent pool in those nations gets deeper.

A senior Trump administration official stated the White House would increase its efforts to educate American workers in the AI field during a recent press briefing. There are also plans to work with the National Council for the American Worker to create educational efforts through academics and industry. The administration will also look to government agencies to create AI-related fellowships.

While the executive order in The New York Times’ reporting focused on AI, the Trump administration is also expected to boost the government’s role in expediting 5G wireless, according to The Wall Street Journal. The U.S. is currently looking to encourage corporate competitors to join the 5G race in fear Chinese competitors could gain a significant global lead for years to come. Next generation 5G wireless turning from a concept to a reality could be a significant development for commercial real estate owners as 5G promises to bring faster speeds and capacity to wireless networks, which they could use to retain and attract tenants. Additionally, 5G is expected to serve as the backbone for revolutionary applications like self-driving vehicles, according to The Wall Street Journal.

“This administration is committed to ensuring that America is positioned for dominance in the industries of the future, and that our workforce, current and future, is equipped with the skills they need to thrive in our modern, increasingly digital economy,” presidential advisor Ivanka Trump said in a statement.