For years, drones have served a multitude of purposes, including being a valuable asset in the commercial real estate and construction industries, reports The New York Times. 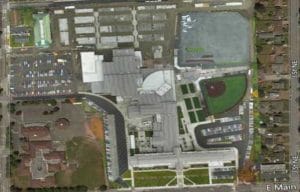 As an example, drones can help executives save both time and money on building sites. They provide digital images, maps and additional files that can be shared in moments, according to DroneDeploy chief executive Mike Winn. Main offices can see what’s going on, while the safety and costing teams as well as designers can comment on the project and share data—and no one has to travel to the site.
More importantly, drones can help improve safety. Before drones, people would have to climb on a roof to do things like measure for solar panels. According to Winn, that would require, “ a guy with a tape measure climbing up there,” which could produce incorrect results and was dangerous.
That danger is even greater when building skyscrapers, said  John Murphy Jr., a contractor on the 58-story Paramount Miami Worldcenter condominium tower being built in Miami. Prior to drones, if a worker wanted to get to the outside of a high-rise, they were, “dropped over the side” in “swing stages.” These are the small platforms that are suspended from cables that window washers typically use. In high winds, swing stages can be dangerous.
“No one wants to go out there,” Murphy told The New York Times. “It’s scary.”
The Occupational Safety and Health Administration’s latest figures showed that falls accounted for 384 of the 991 fatalities in the construction industry in 2016. It’s believed that number could be decreased over time if drones are used more for quality control inspections and similar operations.
Murphy recently was at the Paramount site to supervise a drone inspection of the tower’s window glazing. The drone’s camera also looked for leaks, water intrusions and additional issues that might not be seen from outside of the building. Before that, the drone inspected the bridge’s steel connection quality, which stands 72 feet above the ground and connected to a parking structure’s main tower.
Drones are not only used on buildings that are already standing. They also assist planners in deciding where to put new buildings. For example, a developer sent a drone to the exact height and location of a potential fourth-floor balcony at the 87-room Foundry Hotel in Ashville, NC so he could decide how to best take advantage of the view.
“A drone really helps us to conceptualize what a development is going to be, because sometimes it’s hard to do that just from a set of plans,” Alexandros D. Papapieris, the development manager at McCall Capital, told The New York Times. “Everyone loves a good aerial. Drones allowed us to paint a picture for the investors about why this was a good idea.”
Drones have also become a revenue generator for young business owners. According to The New York Times, Matt Coda started a small video marketing company after he graduated from college, and landed a contract to document the South Carolina Ports Authority’s initial phase of its 280-acre container terminal.
For more than a year, Coda flew a drone along a pair of routes on the development site to show his client, S.J. Hamill Construction Company how the project was progressing. He also worked on the South Carolina Aeronautical Training Center’s building site—an $80-million, 224,000-square-foot structure at Trident Technical College in North Charleston.
“It’s fascinating to see a project evolve,” Coda, a certified drone operator, told The Times. “But I’m grateful to be the one flying the drone and not doing the actual construction.”