The CTIA’s 2019 Annual Wireless Industry Survey revealed that Americans used 82% more mobile data last year than it did in 2017. The survey results showed an increase in wireless across almost every metric, reflecting an unprecedented consumer demand.
“Americans are consuming more wireless data than ever,” CTIA President and CEO Meredith Attwell Baker said in a statement.  “This exponential growth underscores the need to continue to free up spectrum to keep up with demand, and provide the much needed capacity for next-generation 5G networks.”
The CTIA, which represents the U.S. wireless communications industry, has conducted this comprehensive annual industry to track the wireless industry’s evolution since 1985. The doubling of wireless data use was one of this year’s survey’s biggest findings. According to the survey, consumers used a record 28.58 trillion megabytes of mobile data last year. That is 73 times more than was used in 2010—the equivalent to 250 million people playing the popular game Fortnite for 1,906 hours.
Other key findings included wireless provider capital expenditures totaled $27.4 billion—a $1.8 billion increase from 2017. Since 4G launched in 2010, wireless industry has made more than $253 billion in capital investments. Additionally, 5G development is currently underway-the industry reported 349,344 cell sites in operation in 2018—that’s a 25,000-site increase from 2017 and the largest year-over-year increase since 2010-2011 when providers began deploying 4G.
Not surprisingly, CTIA’s survey also found consumers are connecting more devices—especially in terms of Internet of Things (IoT) products. Last year, Americans connected 421.7 million mobile devices, which was a little more than 21 million from 2017. Of those devices, 284.7 were smartphones. The largest growth was seen in data-only devices like smartwatches, IoT devices and connected cars. This technology saw an increase of more than 10% to 139 million devices.
Finally, although a lot of wireless communication occurs over wireless data, CTIA’s survey noted there was an increase in traditional voice calls and text messaging in 2018. Consumers spent approximately 2.4 trillion minutes talking on their mobile devices last year, which was 10% more than in 2017. Mobile users also exchanged more than two trillion text messages (combined SMS and MMS)—a nearly 16% increase year-over-year.
If commercial real estate owners are to take anything from this survey, it should be make sure your building can accommodate high volumes of mobile data. As more people are adopting wireless devices and IoT products are becoming more prominent, there’s a good chance that the numbers in CTIA’s survey will continue to climb. If the numbers do increase, there will be more CRE tenants that will expect that the buildings where they live, visit or work will have adequate in-building wireless coverage so they can use their devices without a problem.

It’s not your fault! Virtually every building has cellular connection problems in part of or the entire building. But occupants inside your buildings will blame you if you don’t get it fixed – or they won’t become or stay your tenants.

Learn about the types of cellular coverage solutions on the market, along with the pros and cons, to find the best solution for you. Download “Solving Cellular Coverage Issues: The Ultimate Buyer’s Guide”. 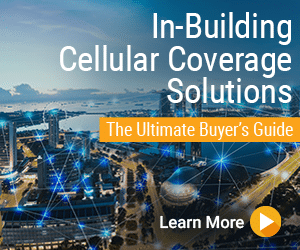