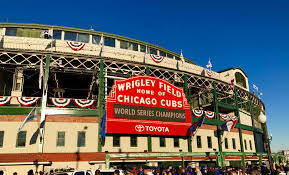 AS Group Professionals recently completed the design and deployment of a new, high-performance distributed antenna system (DAS) at Wrigley Field, home of the Chicago Cubs, in time for the team’s home opener, according to Mobile Sports Report.
The in-stadium cellular network was scheduled to be ready for the 2017 season, but the Cubs’ 2016 World Series run delayed a lot of the in-progress plans at the field. For Cubs fans, the delay was worth it as their team captured its first World Series title since 1908.
With the delay, some of the more ambitious portions of the renovation, like taking out most of the seats and concrete in the lower seating area to make way from lower-level club spaces, took place during the winter, but DGP and the Cubs’ IT team got the new cell network running before the first pitch on April 9.
“We definitely put scheduling and timing to the test, but we got it done,” said Andrew McIntyre, vice president of technology for the Chicago Cubs, told MSR during a phone interview.
The networking plan at Wrigley, which was first announced in 2015, includes coverage for the plaza outside of the stadium, the team’s new office building and the recently opened Hotel Zachary across the street. The plan includes a new Wi-Fi network that uses Extreme Networks gear. According to McIntyre, since the Wi-Fi Network is more construction-conflicted than the DAS deployment, the it’ll be gradually introduced during the coming months.
“By the All-Star break (July), we should have both systems online,” McIntyre said.
DGP’s DAS system uses JMA equipment as does the company’s other large sporting venue DAS deployments. These include the NFL’s San Francisco 49ers’ Levi’s Stadium and the NBA’S Sacramento Kings’ Golden 1 Center.
DGP president Steve Dutto acknowledged the challenges that came with the Wrigley project. One of which was when DGP technicians had to set up scaffolding to mount antennas, but were unable to because rather than there being a concrete floor, a 60-foot hole in the ground was there instead.
“We worked around all that and got it done,” said Dutto told MSR.
Dutto also stated DGP had signed up all four of the major U.S. wireless carriers for DAS, and only Sprint was not operational in time for Opening Day. He said the head-end building for DAS is located in what he believes is an old hot dog stand about half a block from Wrigley Field.
Although the DAS antennas are all overhead mounts, it should not be an issue at the ballpark because the overhangs that provide plenty of mounting spaces. However, since Wrigley possesses such a historic look and feel, DGP did had to, “tuck things away better and make sure we had good paint matches,” Dutto said.
The field-level renovations made completing the Wi-Fi deployment something that could not be pushed—there are no overhangs that cover the premium box seat areas, so Wi-Fi Aps need to be mounted under seats. That was something that could not be done in time for the home opener, McIntyre explained.
“It’s less of a technical challenge and more of a structural engineering challenge,” said McIntyre of the under-seat deployment method. It normally involves a lot of work that includes drilling through concrete and mounting APs in weather-sealed enclosures.
According to McIntyre, the Cubs and Extreme plan to use under-seat deployments in Wrigley’s famous outfield bleachers, which also does not have an overhead infrastructure. He referred to it as a, “slow roll” and portions of the Wi-Fi network will come online gradually during the season. The first spot will be spaces outside of the stadium.
Comcast Business recently announced a sponsorship deal with the Cubs that will help bolster the new network. This multi-year technology and marketing partnership will provide Wi-Fi, video and voice services at the stadium and the Cubs’ surrounding properties, including the new front office. The ball club will see an, “XfinityWifi@Wrigley” label on the Wrigley Wi-Fi SSID. Comcast will provide twin 10-Gbps pipes to power the Wrigley Wi-Fi network, according to McIntyre.